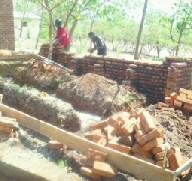 Work has starting in Namisu village in Malawi getting ready for the arrival of our Flexigester to treat their sewage. They have started to build a new latrine block. Their current latrines are pit ones which, as they were almost full, have been pumped out so they can continue to be used whilst he new block is being built.

The new latrines are pour-flush ones. That means instead of everything dropping straight into a pit beneath the toilet, or squatting plate as it actually is, the squatting plate is designed to have water is poured down after use which flushes everything down a pipe and into the digester.

This arrangement has meant that we have had to do some design changes to the digester. The original plan was to empty pit latrines by vacuum tanker and then the tanker would discharge into the digester which was located above ground. With the pour-flush system the digester needs to be fed by gravity and so, rather than put the latrines up in the air which was one option, we have lowered the input level of the digester. This caused knock on effects for getting the stuff out of the digester but we think we have got all the levels sorted now.

The next stage is to get the digester built and sent to Malawi. I'll keep you informed of our progress.

Another link in the chain has just been forged in our plans for a demonstration digester in Malawi. One of our contacts suggested that we had a look at the Charity supported by Cooleraid. Cooleraid is a nationwide company based in Newmarket that provides bottled water and water coolers to offices and other establishments. What makes the company different is that it donates 10% of its rental charge and 35p of each water cooler bottle sale to the Lifeline charity. Check it out at http://www.cooleraid.co.uk/.

You may be wondering what that has to do with SOWTech. The International Red Cross (IFRC) are doing their sanitation trials in Blantyre in Malawi and they were looking for a suitable site to trial our digester. The Lifeline charity works with orphaned and abandoned children in Malawi, building villages for them to live in. One of these villages, Namisu, is 20 minutes north of Blantyre making it ideally situated for a digester trial.

John and I met with the UK founder of the charity, John Searle, such an inspirational man, and told him of our vision and our search for a site where the digester will be used, looked after and will be of benefit to the people who use it. He then put us in touch with Angus, the man on the ground in Malawi.

Things have moved quickly since that initial meeting just nine days ago. Jan Spit, the Sanitation Adviser for the IFRC on the Emergency Sanitation Project has been to visit Namisu and has agreed to put our digester there.

We are all really excited about this. Every day it seems that another piece of the jigsaw is falling into place and the vision is coming closer to reality.

On Monday John and I met with a really interesting guy, Nick Thomson. He is a Professor at the Wellcome Trust Sanger Institute and the London School of Hygiene and Tropical Medicine (LSHTM for short). He works on tracking the evolution of diarrhoeal disease showing how they spread. His work includes looking at cholera and he was able to tell us all about the disease and how it spreads.

Did you know that cholera bacteria live in the membranes surrounding algae and it appears that cholera outbreaks are seasonal? Nick works a lot in the Ganges delta in Bangladesh where the villages surround dug out lakes.

Our recollection of the conversation is that in the summer there are algae blooms on the lakes then, when the dry season comes, the lakes dry up, the algae dies and releases the cholera into the water. This water is used to wash in, the children swim in it and the cattle graze along side the water, drink it and the cow dung goes into the water. Also, if you are rich, you position the outlet of your toilet over someone else's lake. If you are poor, you have other peoples toilets emptying into your lake. Not nice!

We then went on to discuss the Flexigester. He was very enthusiastic about the use of our Flexigesters for health reasons. His view was that it should help to reduce the number of cholera bacteria. You need quite a large dose of cholera to be infected by it and therefore reducing the amount of viable bacteria can bring about major improvements in health. As far as he is concerned any thing that can reduce the number of cholera cases can only be a good thing even if it doesn't eradicate it.

It was really stimulating to speak with someone so informed about and familiar with current research.

This week the SOWTEch dream came one step closer to reality.

John went with Craig and Elaine from Butyl Products to Geneva to meet with William Carter the head of sanitation for the International Federation of the Red Cross (IFRC). We'd had a meeting with him in September and the follow up was to discuss our proposal for an AD plant to treat human waste.

The good news is that he likes it and wants us to put a demo Flexigester in Malawi by the end of the year.

Another extremely valuable benefit of the visit was that he was able to have an wide ranging discussion with William about the problems associated with sanitation in emergency conditions.

Did you know that something like 80% of the IFRC work is with flood relief? In many of the areas that flood they use pit latrines which then become part of the contaminated water problem. With the Flexigester everything would stay enclosed.

I know that you have just had one Lynn's letter but I couldn't wait to tell you our latest news. We have been accepted as a Community Interest Company, a C.I.C. This is so exciting for us especially as the whole process took less than a week and we were told it could be up to 6 weeks.

I realise you may be asking yourself “what is she on about?”, “What is a Community Interest Company? - I've never heard of it”.

In a nutshell, a Community Interest Company is a limited company but it is specifically for the benefit of a defined community and not for private gain, a social enterprise. It is registered at Companies House and has directors and shareholders like any other limited company but its assets are locked in so they can't be transferred except at full market value to benefit the community or to another C.I.C. or charity. There is also a cap on the dividends it can pay out and has its own regulator within the Department for Business, Innovation and Skills. The other legal thing that makes it different is that every year, as well as submitting annual accounts, we have to submit an annual report about the activities we have undertaken to benefit our community.

As part of application to become a C.I.C. We had to submit a Community Interest Statement saying which community we were going to benefit and how we were going to achieve this. We said that The company's activities will provide benefit to the people in low and middle income countries through the development and provision of eco-technologies.

It was very important to us that we became a C.I.C. as we wanted to publicly show that we are not in this to make a lot of money for ourselves but that we want to do something that is for the benefit of others who do not have access to the things that we take for granted. So celebrations are in order as we continue to finalise the last details of the Flexigester for Malawi.

I don't know if you have have ever heard of responsible tourism. It is something we were made aware of recently when we met with Keith Virgo. He works with a company called Village Ways which is a responsible tourism company. They offer holidays in India (Uttarakhand, Rajastan, Karnataka & Kerala), Nepal and Ethiopia (www.villagewayspartnership.com). The holidays are based in rural villages in these locations. The accommodation is in local style houses that have been especially constructed or renovated and they are owned and managed by the local people. The guests walk from village to village accompanied by local guides. The community-owned guest houses have basic comforts, food is locally grown and cooked in local style. Guests can participate in village activities. The whole ethos of the company is that the tourism benefits the local community through providing a supplementary income.

In fact Village Ways have just won an award at the World Responsible Tourism Awards in the Best for Local Economy category in recognition of the significant income they have brought to rural households that are struggling against poverty. The awards celebrate and inspire change in the tourism industry and help raise awareness of the issues around responsible tourism.

So what is SOWTech’s interest in Village Ways? In their village in Hacra in Rajasthan there is no mains water. All water has to be brought in by camel so water conservation is very important. We are looking to supply a digester to take waste from food preparation and the toilets. This will give the local community a nutrient rich irrigation water for the tree crops that they grow and also, by using the biogas from the digester for cooking, help to conserve the dwindling supply of firewood. The Village Ways Board of Directors has given their approval in principle. The next step is to talk to the villagers to see if it is something that they would like.

John, Alison and I would like to take this opportunity to thank you for your support this year and hope that you and yours have a good Christmas and a happy and prosperous New Year.