We have all heard on the news about the devastation cyclone Idai has had in Africa. As SOWTech has projects in two of the worst effected countries we contacted them to see how they were coping.

Angus, the General Manager at Namisu in Malawi, reported “The last ten days or so have been quite challenging. We are all fine on the high ground, just got extremely wet, trees falling down etc, but the country has taken another big blow with the heavy rains and subsequent flooding in the lower lying areas such as Phalombe, Chikwawa and Nsanje. This in fact occurred the week before cyclone Idai. There was a very strong low pressure system which was the forerunner to the cyclone that brought 15 inches of rain in Blantyre over 4 days, similar to the previous flood some four or five years ago. So even where the flooding didn’t occur, many hundreds if not thousands of houses country wide in the rural areas have collapsed as a result of the perpetual rainfall.

We have had many pit latrines at several of our centres collapse because of the saturated ground and one roof blown off. We’re distributing plastic sheeting to families associated with our daycare centres to help make their houses and roofs a bit more watertight. Also temporarily accommodating some of the daycare children into our residential system. Relief camps have been set up in various places to help the displaced. We’re not sure yet the full extent of the crop damage.”

The report from Ian of Africa Trust about the situation in Zimbabwe was a little better. They had not been so badly affected in the Mwoyoweshumba area. Roads were washed away and roofs blown off but no one had been injured. The Interseasonal rainwater harvesting system sustained some damage but that was soon repaired and Ian sent us this photo of the full water tank. Sitting in our brick-built centrally-heated homes we can not imagine what it must be like to lose everything to such a force of nature. Our thoughts and prayers are with them all

Grant to design an ecookstove

We have had some really exciting news. We have been awarded a grant by Loughborough University in their Modern Energy Cooking Services -Technology Research Innovation for International Development (MECS-TRIID) programme.

We have been given the money to design and prototype a new type of cookstove that uses solar power for use in rural Africa, and specifically, at first, in Malawi. Although it’s a departure for us from waste and sanitation it is right up there with sustainable living and prevention of health issues.

At present most rural households in Africa use the traditional 3-stone method of cooking. That is three stones set on the ground with a pan resting on them and a wood or charcoal fire under the pan in the centre of the stones. This method of cooking has been used for generations. However deforestation means that fire wood is getting scarcer, the cost of it and charcoal is increasing and people have to spend longer looking for it. There are also many health hazards from using wood fires; inhalation of smoke is the cause of numerous respiratory illnesses and burns from the fire is a constant danger, especially to children.

We are working in partnership with an entrepreneurial Cambridge electronics company to design a cookstove that uses solar panels to capture to sun’s energy and to store it in a thermal mass until it can be released for cooking with. One of the most important parts of the design is to enable to stove to be produced in the local communities with limited import of materials to make it affordable. With that in mind we plan to work with a Malawian based solar panel company and have already started talking to them. We are also going to be liasing with the local communities in Malawi so that we have their input into what they want and what they would use. We are once again working with Aquaid Lifeline for this. They have been really helpful in answering our questions and they are going to host me when I go out to Malawi to visit the ladies who actually do the cooking both at the Children’s Village in Namisu and in the local villages.

The grant is only for 6 months so this is going to be a very exciting time for us and we are hoping that we can produce something that can be of real benefit to the women and girls in Malawi and beyond.

Exciting start to a project in Zimbabwe with a big potential

You may remember back in November 2018 I told you that SOWTech were developing an Interseasonal Rainwater Harvesting (IRH) system to be trialled in Mwoyoyeshumba School in Zimbabwe by the charity Africa Trust. Recently we have started partnering with Bolsan in Zimbabwe and Admire from Bolsan went to visit the school on a fact finding visit for us.

The pilot system was installed in December 2018 and had been in use throughout the rainy season. The Headmaster of the School was really excited about the system and very happy with it. There had not been much rain this year with most of the rain falling during Cyclone Idai. This led to the water table dropping and their well being virtually dry.

The school has reported that they collected about 28,000 L of water which was 90%+ of the rainwater that fell even during the cyclone.

The water collected by the IRS is being used at the school for drinking, sanitation and for irrigation. It has meant that the children have been able to come to school everyday so their education has not been interrupted.

We are really pleased with the positive comments about the scheme. There are some areas that can be improved following the feedback which we will be working on in future months.

I recently had the privilege of going out to Malawi as part of the ecookstove project. I was the guest of Aquaid Lifeline at their Children’s Village at Namisu where I was met and hosted by Josie Charter, one of their trustees from the UK.

The purpose of my visit was to find out first hand how and what the women cook in rural communities and to get their input into the design of our ecookstove. I spoke to a number of ladies both in the villages and in the Children’s village. The staple food is nsima, a thick porridge made from maize flour. This is normally eaten with boiled red kidney beans and a vegetable relish. In the villages they cook on three-stone wood fuelled fires that are outside of their houses. The ladies get up at 4am to light the fires and cook a maize porridge for the children before they go to school. The ladies buy in all their wood fuel which is a big expense for them, 30-40% of their income, especially as the cost of the wood can double in the wet season.

Some of the design outcomes from my visit was that solar power stoves would be welcome. The stoves would have to mimic their current stoves as the stirring of the nsmia is important so an enclosed oven type stove would not work. A stove that had more than one hotplate would be an advantage as it would allow the nsima and kidney beans to be cooked at the same time cutting down on the actual time spent cooking.

I also visited a number of schools with Josie. At one of these schools the older students held a debate on the impact of new technology. It was initially focused on internet and mobile phones but after they were told why I was there they discussed using solar power for an ecookstove. They were very enthusiastic about especially as they were very aware of the problem of deforestation. The other advantages they highlighted were less contamination in the food, money saved from not buying wood, it would be cleaner and more healthy. Their concerns were the initial cost of the stove, the food might taste different and that it might take longer to cook.

Another highlight of my visit was being taught how to make nsima. My attempts to beat the nsima to make it smooth caused much amusement but, with help, I succeeded. It even tasted alright too. We ate some of it and gave the rest away to a local family.

The information I brought back will now be used as part of the User-Centred Design process as we go forward with the project designing the ecookstove and building a prototype. 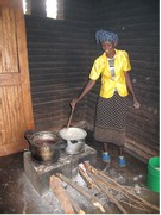