You may remember that around this time last year I told you about the terrible effects that the drought was having on the Namisu Children’s Village in Malawi. I shared with you the photograph below, from Angus, the General Manager of the AquaAid in Malawi, of the maize crop failing through lack of water. He has been in touch with us again this year about his maize crop. This time it is much better news.

He said, “About a year ago I sent you a depressing photo of our maize crop at Namisu, stressed from drought. Thankfully, this year we have had very good rain and you can see from this recent photo a much better crop. The maize and food relief has generally been very good and alleviated a lot of suffering. Should the rains continue Malawi will harvest a good crop of maize this year.”

The main rainfall season in Malawi is October to April and the rain generally starts in the south in November and gradually work northwards. The Malawi Department of Climate Change and Meteorological Services is predicting above normal rainfall for large parts of Malawi this rainy season so this should be good news for the crops and for food security.

The dependence on the rains is literally life or death in many parts of Africa and yet there are very few schemes for large scale water harvesting. One noticeable feature of many African houses is that they have no gutters so when it rains the rain water runs away and is lost. One of the things we have been working on here at SOWTech is domestic rain water harvesting. We have been designing gutters that work on corrugated tin roofs. These gutters are connected to water tanks that can hold thousands of litres of water rather than the domestic-sized cement or blow moulded plastic water tanks that hold hundreds of litres. The SOWTech view is that the more water that can be stored in the rainy season the more will be available in the dry season.

You can measure and quantify the amount of waste that goes into a Flexigester and the amount of biogas collected but how do you measure the difference that having a Flexigester has made to the lives of people. You can quantify the number of meals cooked by the biogas and therefore estimate the money/time saved by not buying charcoal or collecting firewood but most other things, such as health improvements, are very subjective. The students from Cambridge Development Initiative (CDI) who are involved with the project in Dar es Salaam are well aware of this and to try and collect meaningful data they have been actively involved with community engagement and have set up educational sessions, run by the Tanzanian CDI students. The feedback that they have been obtaining is very good. According to a recent survey, 97% of households agree that the project has improved the health of the community. Other feedback that has been obtained includes “it has brought peace between neighbours because of the better conditions of the street” and a female resident said that the new system has removed the embarrassment she used to feel when using exposed pit latrines. This and other news about the project has been published in the Cambridge University journal Research Horizons issue 32 under the title “A sewage system that ‘digests’ and ‘cooks’ human waste”. The article, written by two of the Cambridge University students, can be accessed at http://www.cam.ac.uk/research/discussion/a-sewage-system-that-digests-and-cooks-human-waste.

Last month there was a big conference in Chennai, India; the 4th International Faecal Sludge Management Conference. Held over four days on 19-23 February, there were 143 presentations as well as an exhibition and poster sessions. The focus of this years conference was innovative and practical solutions that can be scaled up. There were three tracks: research, case studies, and industry. On the Tuesday in the Industry track session “Technology innovation – From the field” our very own Ravi Solanki presented a paper “SimpliSafi: an off-site sanitation system that vertically integrates waste collection and sludge processing for informal settlements”. You can find the abstract on this link to the susana website and then choosing the "FSM Industry Track" and the abstract of Ravi's presentation is on page 34. You can view the slides here and listen to the full presentation. The link to the slides contains a lot of pictures of the SimpliSafi system in Dar es Salaam. The second link is an audio of the full conference session with Ravi's talk starting at about 3.5 mins. Ravi had been sponsored by The Gates Foundation to be able to attend the event.

He had found the conference very interesting and very stimulating and has come back with lots of contacts that we need to follow up. There were a wide range of new technological innovations presented showing how much the sanitation issue has rapidly come up the agenda since we first started working on it. However Ravi’s overall impression was that although the conference was big on innovations there was a lack of implementation of ideas into practical situations. This was one of the reasons that so many people were interested in SimpliSafi and the Flexigester, because we did have examples of it being implemented in real life situations. Hopefully we can build on this over the coming year.

This years maize crop in January 2017 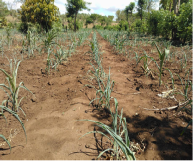 The Flexigester that was sent to Elshadai Children's village in Ethiopia has finally been installed and is starting to produce biogas. It has been a long wait for both us here at SOWTech but also for the Trustees of FECIN (Friends of Ethiopian Children in Need). We first started to talk to them in January 2015. The Flexigester was finally shipped in July 2016 and in June 2017 Alem and Tesfai were able to begin the installation. SOWTech were pleased to be able to help them with the questions and queries that they had during the installation process.

Part of the delay in the installation is that Elshadai and Ethiopia have been beset with many problems that have had to take priority over the Flexigester. The village was experiencing difficulties with its financial resources, the Internet, erratic at the best of times, was shut down throughout the country for over two weeks, (they think that this was to prevent the hacking of school exam questions which happened last year) and then the weather has caused huge problems.

Hailstorms in July were followed by unusually heavy rains which caused severe flooding in the village for two days. No one was hurt but it was quite disturbing for the children and members of the staff. A lot of the crops, especially the fruit and vegetables were completely devastated by the hail and rain. This means that not only will there be no produce to feed the children but also they have lost an important income from the selling of the produce in the local towns. The EOS-UK website has photographs of the devastation and a description of the damage done.

Despite all of this Alem and his team have continued to install the Flexigester. They have built a shelter over it to protect it from damage by animals, children and storms.

Slurry from an old biogas plant was used to activate the Flexigester and it is now being fed with animal dung mixed with water or animal urine.

The Flexigester was visited by representatives from governments office of agriculture, not-for-profit organisations and agricultural colleges as well as farmers when they were on a tour of the Village. They were all impressed with the Flexigester.

We hope to be able to work further with Alem and Tesfai and make their Flexigester an exemplar in Ethiopia.

John accepted the award on behalf of SOWTech and received a framed certificate. The citation for our award reads:

In recognition for outstanding innovation and achievement in water & sanitation with significant impact on Neglected Tropical Diseases and diseases of poverty. This award recognises for SOWTech:

• innovation in waste management for humanitarian and community health

• the measurable impact on health and economic development

ISNTD held its annual Water Conference in the National History Museum, London on 23 November 2017. This conference focuses on how water, sanitation and hygiene (WASH) can contribute to better health, particularly with regards to neglected tropical diseases (NTDs). It attracts speakers and delegates from many organisations and disciplines.

As part of the conference the society presents six awards for achievements in areas connected with WASH and NTD’s. These include awards for research, community engagement, data, behaviour change, education and the WASH innovation Award. The WASH Innovation Award is for innovations in the field of Water, Sanitation and Hygiene with proven or potential significant impact on the control, treatment or prevalence of diseases of poverty, with a preferred focus on neglected tropical diseases as listed by the World Health Organisation.

SOWTech are proud and honoured to receive the award and would like to thank the conference organisers and our partners Butyl Products Group for making this possible.

Another year has gone by and SOWTech continues to try and help those who need improved sanitation, sustainable fertilisers for their crops and ways to prevent the spread of disease.

Another focus of our time this year has been on “supported local manufacture” (SLM). We believe that although selling ready made products from the UK has its place, ultimately these products need to be able to be made locally in the country of use. We have therefore developed new range of products that use materials and methods which are compatible with the concept of supported local manufacture. John recently gave a talk at the Institute of Neglected Tropical Diseases (ISNTD) Water conference on the SLM concept entitled ‘What needs to change to improve the “rate of change” in water and sanitation’. The talk was well received and I was hoping to be able to give you a link to the talk on YouTube but it’s not up yet.

As part of looking at SLM we have been thinking about other related products. One of John’s vivid memories from a previous trip to Uganda was standing in the pouring rain, watching it run off the roof onto the ground whilst the women of the household had to walk down to the river at the bottom of the hill to collect water for use in the household. The house had no gutters as ours do and the explanation given was that guttering was too difficult to fit to corrugated tin roofs and the water containers we too small to be of much use. So with this very much in John’s mind, we have been designing flexible gutters and large storage tanks/reservoirs that can collect the water in the rainy season so it can be used for irrigation, washing etc in the dry season. We are hoping to trial these ​in Africa next year. 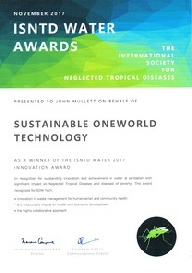